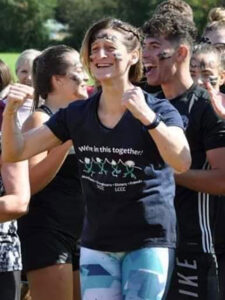 Louise Ross, is a fitness professional who has chosen to share her story of why having a smear test is so important. This procedure saved her life.

I had the odd abnormal smear result which sorted itself out, two pregnancies with no major issues and then three years after my daughter was born, I was called back to attend another smear.

I booked my appointment and the result came back abnormal. I thought “no big deal it will sort itself out.” I re-tested 6 months later expecting a clear result. However, abnormalities were once again found, and I received a scheduled appointment for a colposcopy.

The doctor removed the abnormal cells saying she wasn’t concerned by what had found but pathology would check it out, so I left feeling less worried.

Two weeks later I received a call from the doctor explaining cancer cells were present. I was only 35 years old. The shock of that call was immense, I couldn’t believe it. I had no symptoms, not even the slightest idea that I may have had cancer.

The following week I saw the consultant. He explained the cancer was Large Cell (Neuroendocrine) Cancer of the Cervix, a very rare form of cervical cancer with the likely hood of staging 1a1 or 1a2, basically meaning it was confined to the Cervix as far as they could tell. However, they wouldn’t know or be sure until they did surgery in the weeks that followed.

I had scans, tests and eventually my radical hysterectomy with the removal of my pelvic and abdominal lymph nodes. I was fighting towards the goal of being cancer-free. 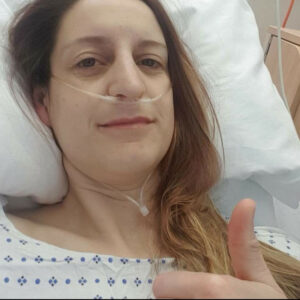 Unfortunately, I had hurdle after hurdle thrown at me… a haematoma burst in my abdomen a week after my op which had me hospitalised. When they removed my catheter, it became clear I had a fistula (tear) between my vagina and urethra causing urine to leak into my vaginal vault. In addition, I had a colonoscopy to check an area in my bowel that had been flagged up as a potential area of cancer.

I finally got to the light at the end of the tunnel (the results). Pathology tests came back with no cancer cells found within any of the tissue removed including my lymph nodes, so therefore the staging was confirmed as 1a2.

After receiving the news, I had no evidence of disease I was ecstatic… But also deflated… Who was I now?

I had been so focussed on fighting that I didn’t know what I was meant to do after it all ended. I felt lost, depressed and alone.

It took 6 months for me to physically recover and be able to start gaining back some of my fitness. I eventually got there and GAINED MY EXERCISE TO MUSIC QUALIFICATION, my first steps to achieving my goal of becoming a fitness instructor, I had wanted to reach this since I was a teenager.

It’s been 2 1/2 years since my diagnosis, and I have had no symptoms or recurrence found and I hope that this will continue.

I do still wake up worrying, the fear of recurrence never leaves me. Some days are worse than others and the battle continues every day, along with the side effects of the treatment – menopause and lymphoedema.

I am giving back where I can, helping with charity fundraisers. I have taken on a role to help people affected by cancer get fit again, teaching local exercise classes suited to cancer patients.

Every day I watch my kids grow and learn. This is the greatest gift because I know if it had not been for those smear tests I would most likely not be here today.

If I can encourage one person to go to a screening test that could save their life, then this whole experience will have been worth it. 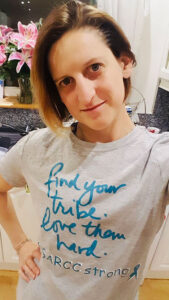